The Minister of the Environment, Ministerial Coordinator and envoy of the COP27 Climate Conference begin the fifth day of the conference with intensive activity

Dr. Yasmine Fouad opens the Day of Science and Youth.. On Flag Day, Egypt confirms that Egypt sends a message to the world about the importance of science as a weapon to counter the effects of climate change
Environment Minister on Youth Day: Calls for COY17 Youth Climate Conference to integrate with COP27 Climate Conference..
And confirms the slogan “Together to Implement” The youth are the shield, the barrier and a powerful player in the operations of addressing climate changes.

Dr. Yasmin Fouad, Minister of the Environment, Ministerial Coordinator and Envoy of the COP27 Climate Conference, utilized the fifth day of the conference with intensive activity, where she participated in the opening of Flag Day activities within the thematic days of the climate conference COP27, with the participation of Dr. Ayman Ashour, Minister of Higher Education and Doctrine Ra Nadia Makram Obaid, the former Minister of Environment, and five experts and scientists.

The Environment Minister emphasized the importance of science as a weapon to counter the impacts of climate change, saying: “With knowledge, scientific evidence and capacity building we will be able to achieve what we seek today at the COP27 climate conference as an implementation conference that puts humanity needs at the heart of climate action.

The Ministerial Coordinator and envoy of the Climate Conference added that Egypt, by launching the Flag Day, sends an important message to the world, emphasizing the integration of science, which provides evidence and figures, and the role of the government in ensuring the integration of the climate dimension and its well managed, this is clearly evident in the fifth goal of the strategy. National Climate Change 2019, which focuses on The role of science, scientific knowledge and working with research institutions, where we are proud of founding the Egyptian Center of Excellence for climate change research.

We have with knowledge paved the way to host the COP27 climate conference, working for implementation to address the impacts of climate change, the Minister of the Environment stressed, saying “If we cannot plan we cannot measure our steps and if we fail to plan we plan to fail.”

The Minister of Environment praised the role of science and scientists who have illuminated the way for a world cooperating to combat climate change, signaling that the Egyptian presidency of the conference was keen to include a day of science not in the usual form but in depth vital issues for implementation, in the framework of the concern of the Egyptian state And on top of it, Her Excellency the President of the Republic and the Prime Minister are involved All parties at this conference, the first of its kind at climate conference, featuring 30 relevant ministers for development sectors.

Dr. Yasmin Fouad expressed the pride of the Ministry of Environment to work on the first map to assess climate change sensitivity, which will be announced today in the Egyptian wing of the conference, which will help Egypt secure its investments and plan well for a better future for its citizens, citing the support provided by Egypt To ITCC International Training and Consulting Center with models that helped to complete this work, It helped us as decision and policy makers to analyze and manage data.

The Minister wished the exit for a successful Flag Day, referring to the great momentum of the day that in the blue zone witness the Flag and Youth Day and their reflection in the green zone to combine the voices of the official, the voices of scientists, youth and various participants to be all together for implementation. Dr Yasmin Fouad Minister of Environment also participated in the opening session of Youth Day in the presence of Ambassador Sameh Shoukry Minister of Foreign Affairs and Chairman of the COP27 Climate Conference, Dr Ashraf Sobhi Minister of Youth and Sports, Mr Simon Steel Executive Secretary of the United Nations for Climate Change, and Dr. War Mahmoud Mohiyuddin, the first deputy to the President of the World Bank for the Development Agenda of the Year 2030 and relations with the UN and companies, Dr Amniya Omrani envoy to the President of the COP27 Youth Climate Conference, where the Environment Minister praised efforts to make the youth conference a success COY17, the role of the United Nations and the United Nations Program now Water in promoting environmental awareness among youth on the issue of climate change over the course of 3 months The past two.

The Minister of Environment expressed her happiness to be among youth leaders and youth organisations, especially in light of the success of the COY17 Youth Conference on Climate Change and its discussions held throughout 3 Fitness, adaptation, flexibility, all integrated with a conference Climate COP27 .

The Minister of the Environment explained that young people are an integral part of the dialogue on climate and its response, and their significant role in transferring energy and technology to vulnerable and vulnerable communities.
The Minister drew attention to the difference of the COP27 conference from previous climate conferences, the goal of assessing the losses and damages first listed at climate conferences has been listed, and the COP27 is a conference for implementation and fulfillment of commitments, a comprehensive conference that includes everyone and includes a comprehensive approach How governments adapt to the adverse effects of climate change , which was clearly evident since the first day of the conference in the international speech to the presidency of the conference, indicating that Egypt, under its presidency of the Conference, provided evidence of this through outstanding organization and efforts made to bring out this version of the conference in an honorable way befits Egypt, which was done on a period R 3 months included massive preparations and enjoyment A weekly patrol at the level of the cabinet presidency to follow up all the details and to achieve coordination between ministers and stakeholders. The envoy of the climate conference clarified that Egypt was keen to implement the green zone with different specifications, to provide the opportunity for youth, civil society, academies, school students, the private sector, indigenous people, women and others to express their views and participate in presenting ideas and solutions to tackle Climate change, where discussions are happening now during our meeting Other sessions in the green zone, which were carried out to simulate what is happening in the blue zone and discuss the same topics and the same days and many initiatives are launched within it, and they have been designed near the blue zone, and with a large space to accommodate all who are considered an integral part Of this process .

The Minister of the Environment stressed the importance of giving young people the opportunity to participate at the local government level to present ideas and solutions not only on climate change but also for adaptation at the local level, with the participation of the private sector and government to achieve what we hope, stressing the need for action “Together we can achieve” slogan that we work together. 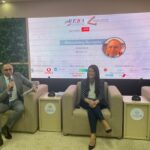