According to Ahram Online, on the occasion of the International Day for the Elimination of Violence against Women, Egypt’s National Council for Women (NCW) launched a 16-day campaign to combat violence against women.

The National Council for Women (NCW) of Egypt began a 16-day campaign to end violence on Friday in honor of the International Day for the Elimination of Violence Against Women.

In Egypt, the 16-day campaign spotlights the health and psychological risks caused by violence against women by coordinating activities with other national bodies, said Maya Morsy, the president of the council.

Among the events are the opening of two women’s clinics at Azhar University and Suez Canal University, a sports event called “Yes Yoga Day,” and seminars on violence against women, women’s empowerment, and workplace safety.

The campaign also includes symposiums on other issues such as cyber-blackmail against women as well as the relationship between overpopulation and violence against women, added Morsy.

Additionally, the Egyptian National Committee for the Elimination of Female Genital Mutilation will launch its door-to-door “Protect Her from Circumcision” campaign in ten governorates.

According to the Egyptian Central Agency for Public Mobilization and Statistics, 31 percent of Egyptian women who are or were previously married and are between the ages of 15 and 49 reported experiencing “physical, sexual, or psychological violence” at the hands of their spouses in 2021.

Egypt has enacted several pieces of legislation over the past eight years to guarantee women’s protection against all forms of violence, Morsy said, pointing to the inclusion of an article in the country’s constitution to protect women against violence.

The NCW has also established 26 units at Egyptian universities nationwide to combat violence against women.

According to the World Health Organization, up to 736 million women worldwide experience physical and/or sexual abuse at the hands of their husbands or other people.

Globally, up to 736 million women experience physical and/or sexual violence in their lives at the hands of their husbands or others, according to the World Health Organisation (WHO). Chairperson of Ramsco: Women are the most affected by climate change 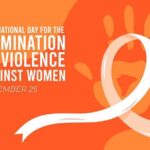