The UN conference of parties on climate change is presently taking place in Sharm El-Sheikh, Egypt being the hosting country for its 27th run, discussing matters of the global climate change and exploring new methods to mitigate its impacts.

Daily News Egypt interviewed economist and Egypt’s High-Level Climate Champion, Mahmoud Mohieldin to talk about methods to achieve green economy and the actions taken by different countries to try and preserve the planet and lessen the effects caused by the continuous increase of carbon emission.

Highlights of the interview:

How large is the funding volume for climate action worldwide?

A value of 2.5 trillion USD is the minimal estimate for the financing gap for global climate action, which means that the ongoing funding is not enough and needs to be raised by no less than six times its current rate to establish counterbalance.

Debt instruments are considered to be the main funding strategy worldwide, having 60% of it depending on borrowing of the overall funding, compared to only 12% – 13% coming from soft loans, which calls for prioritizing investments and consider borrowing as a last resort option.

How can developing countries finance climate action in light of highly indebted budgets?

What about innovative financing solutions to finance climate action?

An increase in environmental investments and swaps are the obvious and efficient solutions to finance climate action. Egypt, specifically, needs to increase its private investments to lessen the impacts caused by carbon emission.

How can African countries benefit from the issuance of carbon certificates for the benefit of major countries?

This market will assist the operation of economic entities in different productive activities to mitigate carbon emission in Egypt and Africa and help them profit from issuing and selling carbon certificates to other countries.

What factors must be in place to ensure the success of the African carbon market?

The African carbon market will thrive as long as it focuses its efforts to apprehend the rules and learn to advantage from them, as well as holding special media courses; creating a whole integrated system is must to achieve success.

About 30 million jobs could be created by 2030, as a benefit from these carbon markets and investing in them can provide up to 3 million USD annually by 2030, reaching 1.5 billion by 2050.

How can the break-even point be reached in light of the environmental justice crisis? Who funds climate adaptation?

The sad truth is, that the countries most affected by climate change are the ones required to take the highest measures to financing and implementing climate action. This is definitely an environmental injustice, as these countries are in most need of funding to survive the climate change.

African countries can’t keep up with developed countries in regards to contributing to the pollution of the planet; their collective contribution to carbon emission amounts to only 3-4% every year.

African countries can’t pay the bill for developing and constructing major companies, as they are already required to spend 30-40% of their general budget, fighting the climate change.

How does Egypt benefit from the COP27 to promote its tourist attractions?

Egypt could easily take advantage of this conference to promote its tourism, while also obtaining the highest amount of investments in climate change issues.

What are the most important areas for investment in climate action?

Investing in people is a crucial part of investing in sustainability and climate action. People need to learn how to adapt and rise above the climate changes. Those working in power plant could use some help implementing better, cleaner and renewable ways to generate energy, rather than harmful, traditional energy resources. This could only be achieved through the trillion projects launching to substitute traditional energy resources with cleaner ones that are better for the environment, which in turn is a great opportunity to invest in the labour market.

How can Egypt take advantage of the current efforts to confront climate change?

Egypt is already taking major steps in the field of new energy, by launching several related projects, in Zaafarana and Benban specifically, along with a lot of projects in the hydrogen sector too. This requires massive investing in labour rehabilitation and education to secure a new generation better prepared to face the various changes in the world.

What should Egypt do during the coming period to increase investments in its human resources?

Egypt should boost its abilities to manage and control vital issues like, climate change, sustainability and increasing investments. It needs to invest in peoples’ health, education and digital transformation, which can easily be achieved by the strength of its youth. 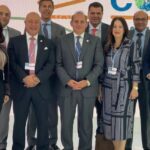