Dr. Ghada waly, Executive Director of the United Nations Office on Drugs and Crime (UNODC), has stated that the COP27 climate summit, that’s currently taking place in Sharm El-Sheikh, Egypt, is setting a historical record as the biggest event regarding the number of attendees, individuals and international organizations, approaching 67,000 participants, considerably an unprecedented number in the history of climate summits.

During a phone call to “Al Hayah Al Yom”, which airs on “Al Hayah” satellite channel, Dr. Waly added that the climate summit “COP27” includes about 1,500 events, pointing out that the hosting country had to expand their conference halls to be able to hold as many people as possible.

Dr. Ghada Waly continued by stating the importance of the initiatives launched within the summit, including the decent life initiative in Africa, which launched today in the presence of Dr. Hala El-Saeed, minister of planning and economic development. 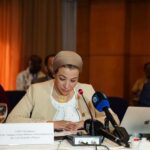 The Minister of the Environment, Ministerial Coordinator and envoy at the COP27 Climate Conference take part in the Consultative Meeting of African Ministers of Environment (AMSEN)