Latur and Osmanabad, districts in the western Indian state of Maharashtra were hit by a fatal earthquake on the 30th of September, 1993, killing nearly 10,000 people and destroying 52 villages.

In contrast with most non-governmental organizations rushing to immediate rescue and crisis control, one group in particular aimed its efforts towards women affected communities and focused solely on implementing their long-term wellbeing.

The Swayam Shikshan Prayog, “SSE” for short, launched 4 years following the earthquake and started going door-to-door, and spoke to thousands of women.

The group achieved major success, instructing and helping women become farmers and entrepreneurs, prompting their financial independence, which in turn helped in speeding the process of recovery from the aftermath of the earthquake.

The Global Center of Adaptation “GCA”, which organized the Local Adaptations Champions Awards, has selected Swayam Shikshan Prayog as one of four winners of its prize and it is set to be announced at the “COP27” climate Conference in Sharm El-Sheikh, Egypt. 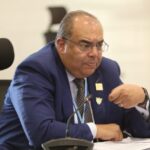