Among the events of the Conference of Parties to the United Nations Framework Agreement on Climate Change “27-COP” by Sharm El Sheikh, Al-Qabaj participates in the launch of the International Union of Red Cross and Red Crescent, the global platform to tackle climate change in the presence of the African Union and the Norwegian Minister of Environment.. It calls for the support of 500 million people on the front lines and filling one billion Swiss francs over five years

In the presence of Minister of Social Solidarity, Mrs. Neveen Al-Qabaj, at the decisive moment, the International Federation of Red Cross and Red Crescent (IFRC) launched the Global Climate Change Platform to strengthen the capacity of local communities to tackle climate change, while mobilizing all resources to combat climate change Human and financial to strengthen resilience and adaptation mechanisms, and mitigate the effects of change on communities. The platform aims to achieve harmony between humanitarian action, development, climate change and support the implementation of integrated risk management measures at the local level to build the capacity, resilience and resilience of local communities in the face of climate change, said Al-Khabaj. Also to build prepared communities before disasters occur and not just two them or L A U N G .

Leaders expressed appreciation for the strength and energy of local communities to bring about real change in communities, noting efforts of volunteers whose work is associated with the message of protecting human beings from all dangers, and serving humanity without prejudice or exclusion, in order to secure and Sen Quality of life in communities.

The Minister of Social Solidarity confirmed that through this platform, the International Federation of Red Cross and Red Crescent will support purposeful participation and active leadership of women, local communities, youth, persons with disabilities, children, and other primary care groups Developing and implementing locally-led climate action in over 100 countries that are vulnerable to climate change.

Sustainable development, adaptation to climate change and mitigation are linked to economic and social conditions, as they touch the daily life of the citizen, and in this context, the importance of human building, investing in it and promoting social awareness on climate and mitigation issues has been emphasized Sharpening risks, stimulating the energy within communities leading to the release of their energies to conserve natural resources and enjoy healthy, safe and dignified life.

The Qabagh pointed out the climate risks to women and children, and the urgent and immediate need for funding climate action and infrastructure needed by communities seeking growth, eradication of poverty and sustainable development, all basic human rights as she emphasized the importance of the Move the early warning warning for disaster risk.

She stressed the need to work on environmental sustainability, integrating local communities in environmental and climate action, spreading awareness and environmental education, praised the goals of the Global Platform for resilience in the face of climate change and disaster risks, and called for the private sector to provide funding She concludes her speech with a call to work and volunteer to protect the earth and humanity.

President of the International Union of Red Cross and Red Crescent Francesco Roca praised Egypt’s distinguished organization at the climate summit and the effort it put into the preparations and negotiations, and emphasized the importance of rapid movement and taking serious and immediate steps to protect communities from the risks of climate change Important and necessity for the integration of communities and their voices heard.

“The platform has been launched to bring about transformative change by a massive increase in investment at the local community, Dr. Rocca, president of the International Federation of Red Cross and Red Crescent, said.”
The Union of Red Cross and Red Crescent Executive Secretary, Mr. Jagan Shebjan, emphasized the importance of the role of volunteers and their time and effort to help their communities.

As Mr Chappagin said real sustainable change can only be achieved when decisions are driven by the people affected, without having to go through multiple layers is crucial if we are to be truly successful in building resilience from A to Z .

Mrs. Josefa, representative of the African Union Economic and Social Committee, participated in the launch ceremony of the platform, described Egypt’s organization of the COP-27 climate summit excellent, emphasized the increasing risks of climate change to African communities, called for cooperation and the importance of access to the climate To account for losses, damages and financing the adaptation.

She referred to the ambition and hope of African communities in achieving the African Strategy for Sustainable Development 2063, and concluded by saying we don’t want to leave anyone behind.

It is noteworthy that Egypt, for the first time in its history, has won a seat in the Board of Directors of the International Federation of Red Cross and Red Crescent, the Union is the largest humanitarian network in the world, and supports National Red Cross and Crescent Associations in 192 countries, and includes the largest R of 15 million volunteers working together For the good of humanity. 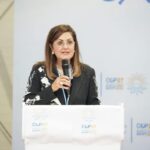 Minister of Planning and Economic Development participates in the Voice of Africa: Directing Investments to Green Projects event 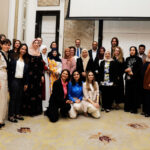