The Minister of the Environment, Ministerial Coordinator and envoy at the COP27 Climate Conference take part in the Consultative Meeting of African Ministers of Environment (AMSEN)

On the sidelines of the COP27 Climate Summit

Environment Minister, Ministerial Coordinator and COP27 Climate Conference Envoy, Dr Yasmin Fouad, participated in the Consultative Meeting of African Ministers of Environment (AMSEN), on the sidelines of the events of the eighth day of the COP27 Climate Summit, Basharm El Sheikh, in the presence of the Senegal Environment Minister of the Environment, Chairman of the AMSEN Conference, and Representative B New Africa Development Partnership Program AUDA-NEPAD, African Development Bank Representative, Committee Representatives UN Economist for Africa, Mrs. Anger Anderson Executive Director of UN Environment Program and African Union Representative.
Dr. Yasmine Fouad expressed appreciation of the Egyptian Presidency of the COP27 Climate Conference for the distinguished representation of Africa at the Implementation Conference, not only at the level of leaders and ministers, but also for the representation of various African organizations that have supported the continent since the inception of the Paris Climate Agreement in 1974, and The African Union congratulated the launch of the African Adaptation Strategy this year, and In recognition of the effort made by the UN Economic Committee for Africa in collaboration with climate action heroes to prepare a project package of African priorities for submission to the COP27 climate conference.

The Egyptian Environment Minister presented an overview of regional initiatives focusing on Africa being launched at the COP27 climate conference, to meet the needs of the continent’s inhabitants and future generations, where two important initiatives for the continent were launched yesterday to ensure food security and food systems Long live Africa, noble life for Africa able to stand up to improve the lives of millions For Africans to be able to adapt to the effects of climate change, which has been built on the basis of the Egyptian initiative is Dignified. The Minister added that the coming days will mark the launch of 3 important initiatives for the continent, an initiative empowering African women in local communities to be more resilient to the impacts of climate change, focusing on food and water security and economic opportunities for women in these communities , which will be launched tomorrow on the social type day in collaboration with the program UNWomen and other UN agencies, then launching Africa’s Low Cost Energy Transition Initiative in collaboration with C for all & IEA, and next Thursday launching Africa’s Waste Initiative 1 by 2020 that aims to reach 60% of Africa’s waste Riqia by 2020, involve the private sector and reduce methane and availability Job opportunities, noting that these initiatives were prepared through a major consultation process in collaboration with development partners supporting the continent and also African governments.

The Minister of Environment reviewed the items finalized by the Technical Advisory Subcommittee and Implementation Subcommittee and the two responsible for organizing the negotiations, and the items to be finalized in the ministerial branch of the African Ministers Meeting, in preparation to seek the recommendations of the African ministers in support of Egypt’s presidency for the COP27 climate conference.

The Minister of Environment gave a summary of the negotiation updates for African siblings following the Ministerial Consultative Session on Amsan, held before the climate conference, where Egypt requested to include the topic of losses and damages on the agenda of the Amsan conference of the importance of this issue to the continent, and to complete the MF Briefing on the topic of mitigation and response measures, including adaptation funding issue, and outcomes Glasgow Action Programme – Sharm El-Sheikh on the Global Adaptation Aim, National Adaptation Plans, Climate Empowerment Plan, Technology Transfer and Capacity Building, Type, and Africa’s Special Needs.

The Egyptian Presidency also expressed its appreciation for the efforts of the African Negotiators Group and negotiators from all other groups, for making remarkable progress in all areas of negotiation, demonstrating commitment and credibility of the multilateral environmental work towards the climate agenda, confirming Egypt’s joint keenness to reach Agreements on all negotiation items within the framework of the COP27 climate conference and facilitation of work Ahead of all groups, and unify the voice of Africa at the COP27 Implementation Climate Conference.

The Egyptian Minister of the Environment invited African ministers and negotiators to participate in a special visit to the Nabq Sanctuary on the sidelines of the conference events as part of one of the most important thematic activities, especially in connection with climate change and biodiversity, to demonstrate the natural model God has given us for This bond, highlighted at Implementation Conference as a living model. 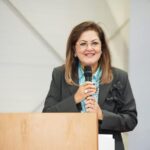