Executive director and founder of the Deep Space Initiative, Sara Sabry became the first Egyptian, Arab and African woman to travel in space last August. Her Initiative “Deep Space” is a nonprofit that aims to increase space accessibility.

In an interview with Al-Monitor, Sara shared her experience of space travel.

Space for Humanity launched a program in 2021 to send citizens from all over the world into space to study the hover effect, which is a cognitive shift that some astronauts experience when they see Earth from space.

Sara proudly announced that she was selected from a group of more than 7000 applicants from 160 different countries of the program to be the first Egyptian to go into space, among a special group of leaders.

“Citizen astronauts must commit when they return to sharing this experience for the greater good, as the program is looking for change-makers from all walks of life”, she explained,

Sabry noted, “I took advantage of three minutes in space to take a close look at the Earth. The overall effect is a cognitive change in consciousness reported by some astronauts during spaceflight. Scientists have noticed an impact on the brains of astronauts when looking at Earth from space because the planet is considered a single organism and you don’t see borders. countries.”

“The overview effect is the experience of seeing the reality of the Earth from space, immediately understood as a tiny, fragile sphere of life, suspended in space, preserved. protected and nourished by a thin shell. From space, national borders disappear and conflicts dividing peoples become less important, while the need to create a planetary community with a united will to protect the “light blue dot” This becomes obvious and necessary,” she added.

Sara also addressed the risks of traveling, “Sitting in the capsule on top of a rocket carries risks, and participants are warned before making their decisions. This experience has changed me because I feel I have accepted the idea of ​​death more.”

She continued: “The reusable New Shepard accelerator was launched into space at incredible speed, and we felt a tremendous G-force inside the capsule during the process. launch and landing, so it requires a great deal of physical effort.” Adding “The technology developed by Blue Origin has a lot of backup support, but this experience puts the lives of participants in their hands”.

Sabry has vowed to use her experience to make a positive change in the world. “When I saw the Earth from space and the expanse of the dark universe, I realized that Earth and space are not separate – Earth is part of space and we, humanity, are a part of it. We try to explore it and understand it and move humanity forward,” she said. 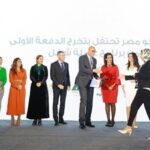 Shelbaya: The "Amla shoghlaha" program is a promising step towards supporting and empowering women 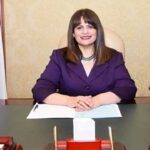