U.S. President Joe Biden has announced on Friday at the COP27 climate summit in Egypt that the U.S. along with the European Union, and Germany are pledging $500 million to finance and facilitate Egypt’s transition to clean energy.

Shortly after his arrival in Sharm El-Sheikh, Biden held talks with Egyptian President Abdel-Fattah al-Sisi before participating in COP27. In short remarks to the press before their closed-door meeting, Biden called Egypt “the mother of the world,” saying it is well suited to host the COP.

He also thanked Egypt for hosting the conference and reminding the world of the importance of climate change. President Sisi welcomed his U.S. counterpart, saying that Egyptian-US relations are strategic. Biden tells COP27 U.S. will ‘do our part to avert’ a ‘climate hell’ 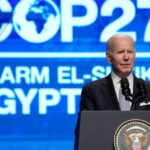