Egyptian Journalist and TV personality, Kaswaa ElKhelaly, expressed her pleasure to be honored by the Egyptian-Japanese University of Science and Technology, in the presence of a high-ranking Egyptian-Japanese.

This came on the sidelines of a symposium discussing the role her TV show “Tonight with Kaswaa” plays in raising awareness and media support for scientific issues, Egypt’s policies on environmental issues, and the state’s interest in developing universities and educational technology.

On her personal Facebook page, she posted “I was pleased with what I saw of the level of scientific research of Egyptian academics and students, the applied level, and the highly accurate management system.

Adding “I would like to thank the president of the university, the deans of its faculties and professors, the directors of the departments and the awareness, and education officials for their efforts in organizing the event, and all of whom made me happy with the hospitality, reception, attendance, interventions, and the tour.

She also thanked the University’s Board of Trustees, headed by Ambassador Dr. Fayza Abu Al-Naga, Advisor to the President of the Republic for National Security, as well as the amount of scientific accomplishment, achieved academically and practically, under the auspices and support of President El-Sisi. 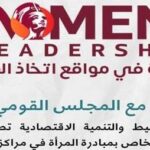 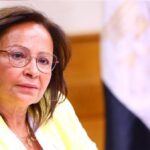