Egypt’s Ministry of Tourism and Antiquities launched on Thursday an international promotional campaign to enhance sustainable tourism in Egypt under the slogan A Civilization Inspired by Nature, on the side-lines of COP27.

El Kady further added the campaign highlighted Egypt’s relationship with nature and its respect for the environment, as well as the efforts of the modern Egyptian state to preserve the environment and transform sustainable green tourism.

This move is the beginning of publishing a set of short promotional films about various Egyptian tourist destinations, added Susan Mostafa, the director general of the tourism promotion department at the Authority.

Sustainable tourism is a concept that covers the complete tourism experience, including concern for economic, social and environmental issues as well as attention to improving tourists’ experiences. Across the world, women are climate solution-makers 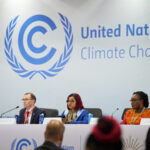