The initiative, according to Maya Morsi, president of the National Council for Women (NCW), provides Africa with the opportunity to achieve the goals of the United Nations Framework Convention on Climate Change through women’s empowerment. This is to create synergy with existing mechanisms and platforms that help women. It is also intended to design Africa-specific interventions to support African women as active participants — like men — in equitable transition.

African women account for more than half of the continent’s population and are heavily reliant on environment-related livelihoods in sectors that are disproportionately climate-exposed, such as health, agriculture, livestock management, forestry, and water management. Climate change poses a significant risk to rural African women due to increased agricultural work and displacement caused by climate impact. Women and children account for 80% of those in need of assistance following natural disasters, and poor women are 14 times more likely to die during a natural disaster. The disadvantages that women face in their daily lives are exacerbated by climate change.

The World Economic Forum (WEF) estimates that it will take roughly 135 years to close the global gender gap. To design and implement effective adaptation strategies, it is imperative to capitalise on the win-win situation of bringing women into climate action.

According to the WEF, the wealth of knowledge in natural resource management that African women have accumulated is critical for implementing effective adaptation policies.

Women make up nearly 40% of the agricultural workforce in 46 of the 53 African countries. Women produce 70% of the continent’s food despite accounting for only 15% of landholders. Climate-sensitive cropping, seed selection and storage, bio fertiliser preparation, pest management, post-harvest processing and value addition are all skills that African women in local agriculture possess.

As a result, the AWCAP’s primary goals are to increase cooperation among African member states by establishing a link between women ministers and relevant environment ministers. This would be accomplished by bringing together a joint focus on women’s issues in the water, energy, and agriculture sectors. It will also aid in highlighting successful female role models and their leadership in those sectors, thereby encouraging member countries to include more women in decision-making.

This is in addition to increasing investments in capacity-building programmes to support women in various fields, beginning with education and progressing to the labour market, improving women’s access to financial support, and building their capacities to prepare investable climate projects. According to one initiative, this is critical for capitalising on existing public-private partnerships. It would be achieved by promoting institutional transformation models within private sector companies that work in relevant fields to ensure gender equality and women’s empowerment. 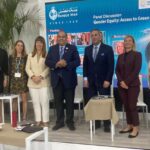